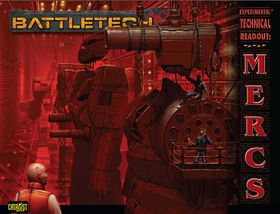 Go To Units The Engineers' Playground

As the Inner Sphere reels from the devastating Jihad, factories have been shattered and supply lines strained. As the collective might of the Inner Sphere's military industries rally to the cause, technicians plying the wreckage of a thousand battles across the war-ravaged realms scramble to piece together new weapons for the fight against the Word of Blake. Armed with prototype weapons and equipment rushed to the front lines, a new age of experimental BattleMechs, vehicles, and fighters dawns.

Experimental Technical Readout: Mercs highlights a sample of the prototype designs that have begun testing in the BattleTech universe during the Jihad. Each design featured in this book incorporates some of the latest technologies to debut in the war against the Word of Blake, as first described in Tactical Operations. Statistics and Record Sheets are included for 13 new experimental BattleMechs, vehicles, and fighters, ready for play in advanced BattleTech games.