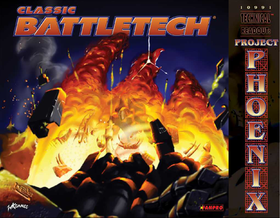 Go To Units Arisen From The Ashes

As the FedCom Civil War swung into high gear and conflict swept through the Inner Sphere, the need for additional war materials was paramount. However, unlike many companies which produced new, but expensive, BattleMechs, a new upstart company, Vicore Industries, took a different route. By taking centuries old machines and upgrading both their physical as well as technological capabilities, Vicore almost single handedly started a revolution that provided a relatively cheap means to bring "new" BattleMechs to the field commanders desperate for more assets.

Classic BattleTech Technical Readout: Project Phoenix provides descriptions, game statistics and illustrations for twenty-nine classic BattleMechs that have been upgraded both in appearance and technology. Also, for the first time in any technical readout, additional illustrations representing all the variants for every design in the book are also included.

Note: The record sheets for these designs can be found in the PDF, BattleTech: Record Sheets: 3085 Unabridged: Project Phoenix.