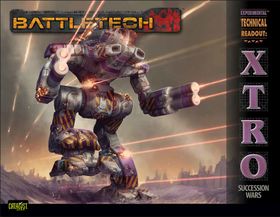 Go To Units After the fall of the first Star League and the exodus of the SLDF, the five Great Houses of the Inner Sphere unleashed their armies against one another with a vengeance, each claiming to be the rightful heirs to the Cameron legacy and the First Lordship of the Inner Sphere. Their scorched earth tactics left entire worlds barren, and destroyed many of the precious technologies taken for granted during the golden days of the Star League's peak. As the years stretched into centuries, their great navies evaporated, and even their mighty BattleMech armies shrank and regressed as their advanced weapons and equipment failed and were forgotten.

Yet even as the Inner Sphere slid toward scavenger tech, the various powers of the Inner Sphere struggled to hone their edge with whatever remained, hoping to turn the tide of the endless Succession Wars with some new innovation their enemies might not have considered.

Experimental Technical Readout: Succession Wars, Volume 1 samples some of the desperate technological experiments that the war-ravaged powers of the Inner Sphere tinkered with during the post-Star League Succession Wars period. Each design featured in this book demonstrates the combination of regressing post-Star League technology levels on the BattleMechs, combat vehicles, and aerospace units that followed. Statistics and Record Sheets are included for 14 BattleMechs, vehicles, aerospace units presented in this book, ready for play in advanced BattleTech games.