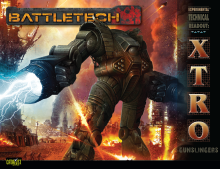 Go To Units The Peak of the Golden Age

Before the fall of the first Star League, humanity reached a pinnacle of technological development that would not be seen again for nearly four centuries. United under the aegis of House Cameron, even the states of the Periphery enjoyed a surge of industrial and scientific development that would forever be known as mankind's greatest golden age.

Predictably, many of these innovations were used first to perfect the engines of war, a practice that continued even into the League's waning years. Now, unearthed from ancient archives on Terra in the wake of the Jihad, examples of some of the more exotic prototypes from the days of the Star League have been revealed, each one pushing the envelope of Star League military design.

Experimental Tech Readout: Gunslingers samples some of the advanced technological experiments developed during the peak years of the Star League era. Each design featured in this book demonstrates the use of cutting edge Star League equipment on the BattleMechs, combat vehicles, and aerospace craft of the day. Statistics and Record Sheets are included for 13 BattleMechs, vehicles, and aerospace units presented in this book, ready for play in advanced BattleTech games.